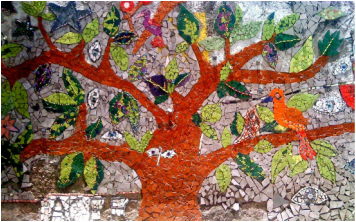 Jacmel Mozaic is part of The Young Entrepreneurs Program, a project of Art Creation Foundation for Children (ACFFC).  ACFFC began as a simple afternoon art program in 2003 for a handful of children in the southern Haitian community of Jacmel..  Over the years it has grown to a full service program offering education, meals, medical care and other daily life needs all while honoring it's core programming in the arts.

By the end of 2009 ACFFC had grown to approximately 50 children and teens.  In January 2010 an earthquake struck Haiti, leaving widespread devastation.  The needs of the community exploded and ACFFC responded by taking in additional children, almost doubling in size to near 100.

Shortly following the earthquake in June of 2010, American mosaic artist Laurel True was invited to come to Jacmel and work with ACFFC youth to teach them how to create mosaics.  They began with a public mural, made from broken ceramic and mirror, depicting a Tree of Life.

​The mural was offered to the city of Jacmel as a memorial to the lives lost in the earthquake, and as a symbol of hope for the community.

Over time the Tree of Life grew into a 350 foot-long mural spanning a city block and wrapping around the corner and down along the ocean, planting the seeds for a Mosaic Program that would change the face of the city.

Since then, the youth in the ACFFC Mosaic Program, now known as team Jacmel Mozaik, have created over 40 public mosaic murals and seating areas throughout Jacmel. This tremendous accomplishment in urban beautification has resulted in economic development and community pride for all of Jacmel's residents.

Jacmel Mozaik is a social enterprise, and all proceeds help to fund ACFFC operations, as well as provide income for individual artists.  ACFFC a registered US 501(c)(3)  nonprofit. 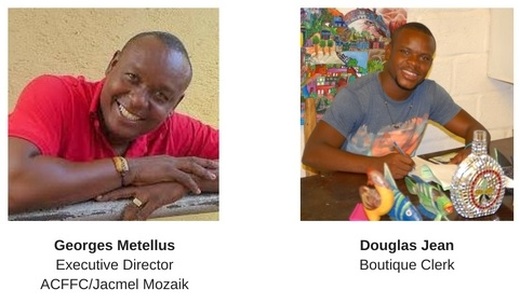 All of us at Jacmel Mozaik would like to extend our genuine gratitude to the following organizations and individuals who have helped us to make this project a reality.